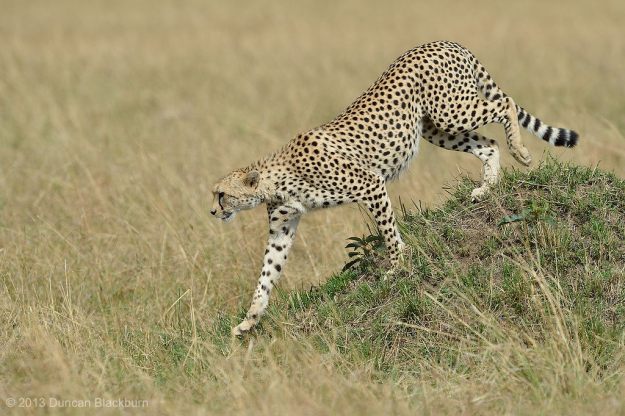 These beautiful animals are, of course, one of the deadliest predators on the plains of Africa. In the Masai Mara this is no exception and is very evident. Together with the other large predator cats, the lion and leopard, they wreak havoc among the migrating herds of Wildebeest (Gnu), Zebra, Topi and Thomson’s Gazelle.

They are known for two particular discriminating features; they are the fastest land animal – accelerating 0-100 kph in 3 seconds and reaching a top speed of 120 kph (75 mph) over short distances; and they are the only large cat that has retractable claws.

They are particularly fond of sitting on termite mounds to survey their surroundings.

The East African animals seem to be much lighter in colour than their Southern African cousins. Cheetah are included in the IUCN list of Vulnerable Species.

1 thought on “Built for Speed”